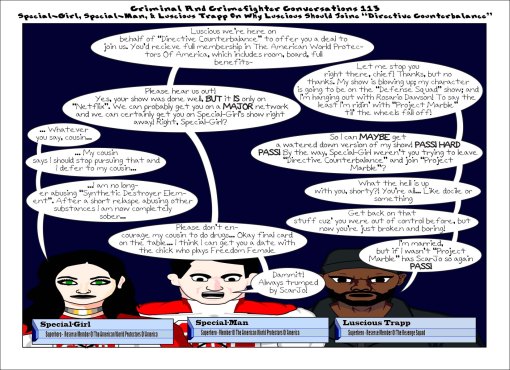 I think I said before that “Superwoman” was one of the better of “DC Comics” “Rebirth” titles. Yeah, scratch that. What was interesting about the first issue was that the comic was about two women (“New 52 Lois Lane” and “Lana Lang”) who didn’t particularly like each other having to work together.  What I thought was a typical first issue cliffhanger seem to have been the full-on death of “New 52 Lois Lane”.  So now the comic is basically “Lana Lang” and her boyfriend “Steel”.  Now the comics is just “meh”.

They also relaunched the “Supergirl” comic. What they should’ve done was scrap everything with “New 52” “Supergirl” and start over while making the comic as much like the TV show as possible. Rather than do that they sorta half assed it and took some elements from the show and the seem to have made “Supergirl” a teenager.

Tomorrow Luscious is joined about by Quickie and Hell’s Hunter as Quickie takes his turn trying to get Louscious to join “Directive Counterbalance”. Hope you enjoy and see ya then!