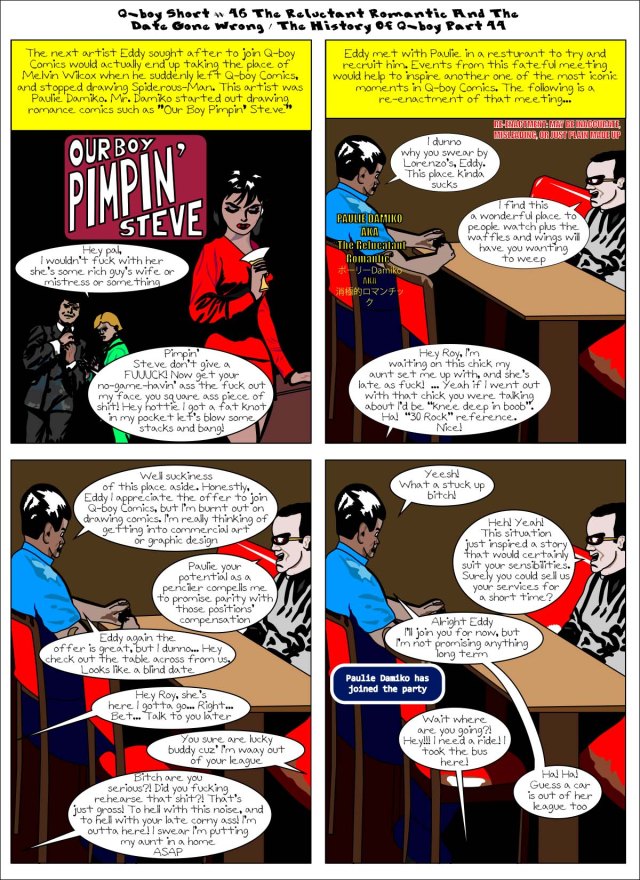 Some of you may be new and only have seen The Big Ol’ Criminal And Crimefighter Conversations 24 Hourly Comics Jamboree Spectacular on Hourly Comics Day and Criminal And Crimefighter Conversations which started last week so welcome to Q-boy Shorts.  I really wish I could say I was smart enough to have planned that this comic featuring a guy called “The Reluctant Romantic” and involving a date ended up being posted on Valentine’s Day, but sadly I’m not.  So anyways Paulie Damiko is based on comic artist John Romita who took over drawing Spider-Man after Steve Ditko.

Panel one is based on this cover to “Our Love Story #4” a romance comic drawn by John Romita. And the “waay out of your league” line in Panel 3 is based on the big reveal of Mary Jane in Amazing Spider-Man #42 which will be referenced again in the next Q-boy Short comic. Speaking of the next comic next time there’s heartbreak when Q-boy meets a new girl.  Have a happy V-day, don’t be reluctant with your romance, and see ya again with Criminal And Crimefighter Conversations Tuesday-Thursday.