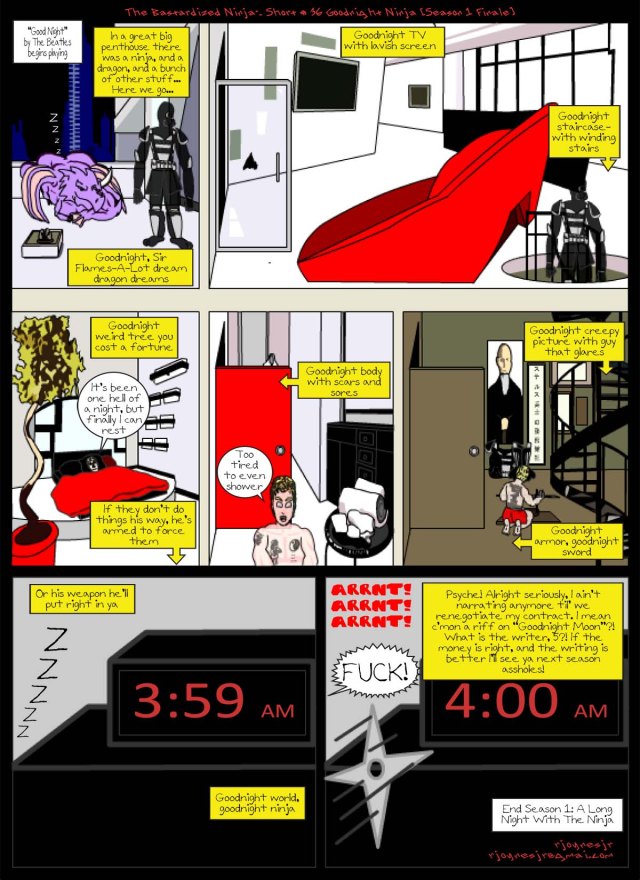 … And so ends “A Long Night With The Ninja” the first season of The Bastardized Ninja.  Our friend Richie has fought security guards, stolen his father car, robbed a convenience store, been chased by cops, fought mobsters, and had an epic battle with Yakuza Kim.   Along the way we’ve seen robots, zombies, clones, time travel, and one time we even saw Richie’s girlfriend.  It’s been one wild ride and a hell of a lot of fun telling this story.  Next season promises to be even crazier as we answer questions like:

“What was the deal with the guy in the all yellow room with the monkey?”

“Did that guy just get mummified while still alive, and what’s the deal with that?”

“Seriously the one chick only appears once!” [Not really a question there pal]

“Those clone Opposite Numbers guys… Wtf?!”

“Is that guy really on meth?”

“The dragon didn’t really do much. I’m disappointed” [Also not a question]

“Way back the ninja guy said something vague about a day job.  Is that gonna be a things or something?”

And several more!  Hope you’ll be there when The Bastardized Ninja returns.  Next time a new Q-boy Short where things get weird with Q-girl.  Hope you enjoy it!  By the way why do you think Richie has to get up so early?