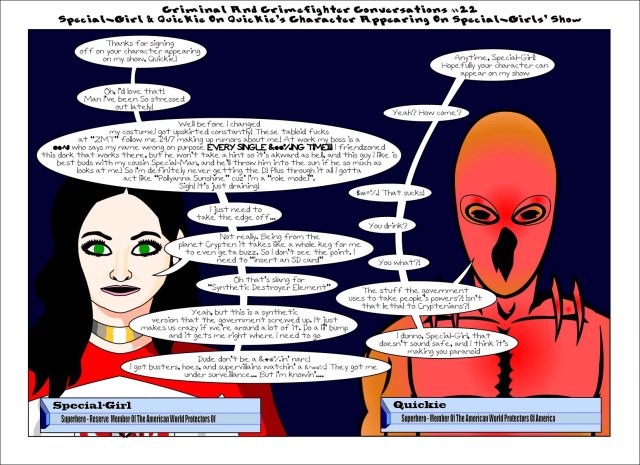 Good evening folks!  This is a special Monday edition of Criminal And Crimefighter Conversations in honor of the big team-up of Supergirl and The Flash on the Supergirl show tonight.  This comic was inspired by the episode of Supergirl where red kryptonite makes her evil (and way cooler for most of the episode).  I just thought “what if she had a tiny amount to make her less uptight and less of a pushover”.  I felt similar when Spider-man got the black costume in “Spider-man 3” and he at least stopped letting everyone push him around.

Moving on, I saw Batman V Superman on Saturday and wow…. What a spectacular failure that was… It SO bad on so many levels. What a joyless, colorless, humorless film with not a trace of fun.  I think I’ll go more into it later this week but yeah it was terrible.

See you tomorrow morning for a new Criminal And Crimefighter Conversations.  See ya then and hope you enjoy!