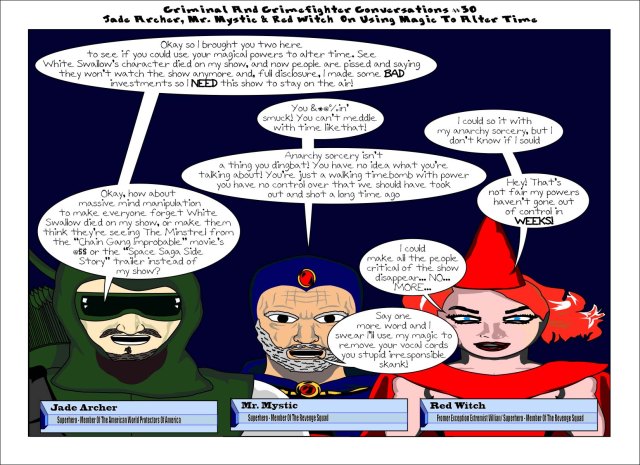 Yesterday I said was going to try to wait and watch the Dr. Strange trailer as it premiered on Jimmy Kimmel and make a comic about it for the next day.  I now realize that was insane. So as I’m writing this now the trailer hasn’t been shown yet… I also got a better idea that involved Jade Archer and Red Witch.  Here’s the thing, the Suicide Squad trailer and the new Civil War footage kinda threw off my plan for this week.  Originally everything was going to be about Black Canary dieing on “Arrow” and the “Dr. Strange” and “Rogue One” trailers. Trying to stay on top of nerd stuff has been hectic lately.

For Mr. Mystic I figured this guy who is this master of magic would be old (and extremely grumpy). Jade Archer here is references some backlash I’ve seen about Black Canary dieing on “Arrow”.  I’ll get into it more tomorrow but I don’t get it. Tommorow (unless plans drastically change again) White Swallow returns along with Q-boy to discuss her character’s death on the “Jade Archer” show, and the trailer for “Space Saga Side Story: Rebel Girl And Her Crew”. See ya then and hope you enjoy!