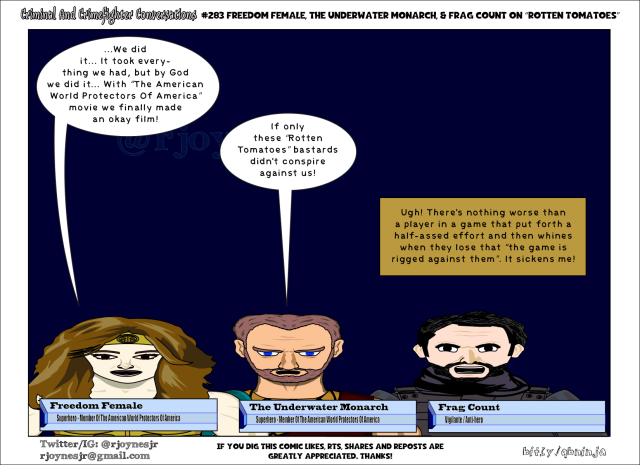 When you’re young you pick sides on things that don’t matter. You’re a fanboy (or girl (FEMINISM!)). So if you’re somewhere around 25 or under and you’re a fanboy I don’t blame you. I was one. Almost everyone is. Hopefully though as you get older you realize companies don’t give a shit about you. Defedning a company’s “honor” means nothing. You realize you loyalty should be to quality. Screw who makes whatever it is. Both “Marvel” and “DC” have great characters. It’s the characters that matter.

“Marvel” makes better movies. Period. It’s not even close. It’s not debatable. Art is subjective but there are standards when it comes to writing, humor, pacing, ect. “Marvel” movies are better written, better paced, the funny parts are funnier, and there more and better action. Sadly, though “Justice League” is the best movie they made yet it’s a critical failure may already be a flop. Too little too late

Saying all that, because “Marvel” makes better movies “DC” fanboys have to make excuses for why move of the “DCEU” movie are critically panned. The most insane one is the “Rotten Tomatoes” rigged conspiracy. Here’s why that isn’t true:

So no they’re just bad movies. Are the reviews for “Justice League” a little harsh? Sure. It’s being compared to the 2nd best comic movie ever, “The Avengers”. “Marvel” makes stuff that gets nitpicked to death too. Completely unrelated but “All Eyez On Me” gets treated like it gives you cancer and at very worst it’s an okay movie that tries to do the impossible job of summing up “2pac’s” life in one movie. It happens. Conspiracies in general are all bullshit because at the end of the day people with power don’t need to hide what they’re doing. They just do it.

Probably getting too deep for you now so I’ll end here. Tomorrow these guys return to talk about “decisions”. Hope you enjoy and see ya then!