Muffina Winters, Special-Girl, & Quickie On Their Shows And Their Shared Network (Censored) 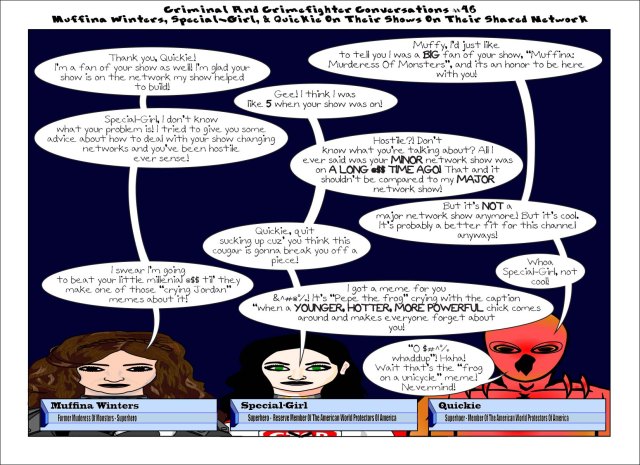 If you’re asking what “Pepe the frog” and “frog on a unicycle” are… I honestly don’t really know. In fact I didn’t know the “crying frog” was named Pepe for some reason for the longest time. Where did they come from? What do they really mean? No clue… But they are memes I see (especially on Instagram) and some of them are pretty funny. Also I don’t know who “Young Metro” is or about his trust issues. I wonder if this is what people who don’t comics feel when watching comic book movies.  Enjoying it but feeling like you’re missing something. Gee hope that isn’t how it feels to read these comics… Moving on…

So the big “Agents Of Shield” finale was last night. It sucked like almost every episode does.  A different person died than I thought but that person barely counts. Tomorrow we’ll hear from The Smasher, General Magnetic, and Dr. Do talk about our secret group of heroes from Monday’s comic.  Hope you enjoy and see ya then!