The Minstrel On Bad Bio On The Mad Jester/

The Upcoming Movie With Her Character And Some Other Chicks 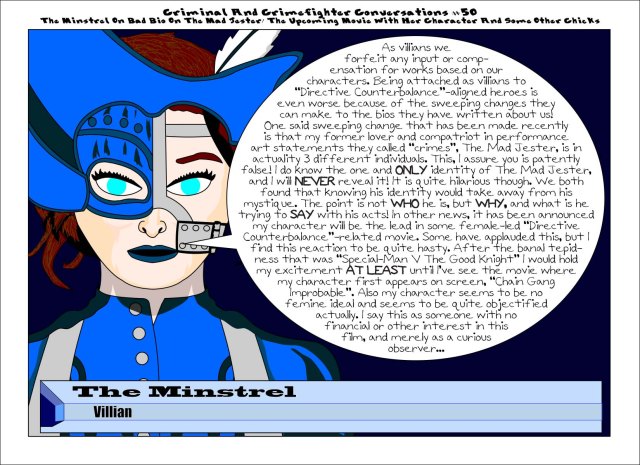 Wow hard to believe I already posted 50 of these!  The first part of this comic is about the idea dropped in “Rebirth” that the “Joker” is actually 3 people.  I actually read “Rebirth #1” and it was kinda unclear as Batman said something about “he doesn’t know what that means”.  Nice backdoor way to cop out.  Good thing it’s there because its REALLY bad idea!  Like “revealing “Wolverine’s” origin” bad!  The “Joker’s” identity should always remain a mystery because anything you come up with is going to be disappointing.

Here’s the thing, the comic actually tries and it at least seems to be coming at things from the right place, but kinda like with “The Flash” finale I talked about yesterday it tries to “have it’s cake and eat it too”. So Wally West is back, but they want to keep the black Wally West they made up too.  I get that they don’t want to piss anyone off, but now they’re saying this one family has 2 guys named Wally West in it that are BOTH speedsters!  Get the hell outta here! Honestly what DC really should do is just admit that the new 52 was a mistake and take everything back to what it was before.  Instead this comic tries to pass the buck on “Watchmen”.  Yes “Watchmen” took away the “hope” and “legacy” and “love” and “sunshine” and “rainbows” and whatever else is good in the DC Universe.  This is total BS.  And as I said before the “Watchmen” characters should never be used.  (end spoilers)

The second part is about this female-led movie that “Harley Quinn” is suppose to be in after “Suicide Squad”.  Seems WAY too early to be jumping up and down about it, but okay…  That’s it for this week.  See ya next Tuesday-Thursday for more “Criminal And Crimefighter Conversations”! Hope you enjoy and see ya then!