The Innovator On The Smasher 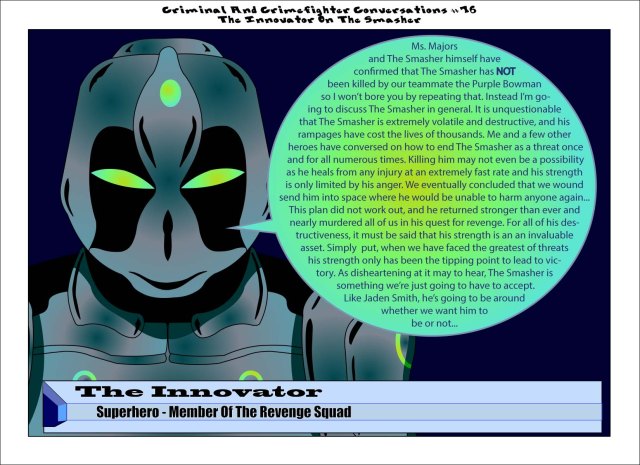 Anyone who’s not a kid or a rube knows that no major characters ever stay dead in comics. The worst thing about killing the “Hulk” is that there was no tension leading up to it.  It just felt like “okay this is what we’re doing for issue 3 ( of “Civil War II”)”. Give the “Hulk” a final rampage, or something huge to fight. Don’t just kill “Banner” basically out of nowhere and end it with that.

That’s how characters always die in comics now. They just suddenly get killed in some event. Then they come back. Rinse repeat. I guess what I’m trying to say is make deaths count.  I don’t care that the character is certainly coming back.  I watch “Dragonball” (which is usually pretty great about making deaths matter despite the fact characters ALWAYS get wished back). Just make remind me why the character is cool and let them do something awesome before they die.

That’s it for this week. New “Criminal And Crimefighter Conversations” Tuesday-Thurday. Hope you enjoy and see ya then!