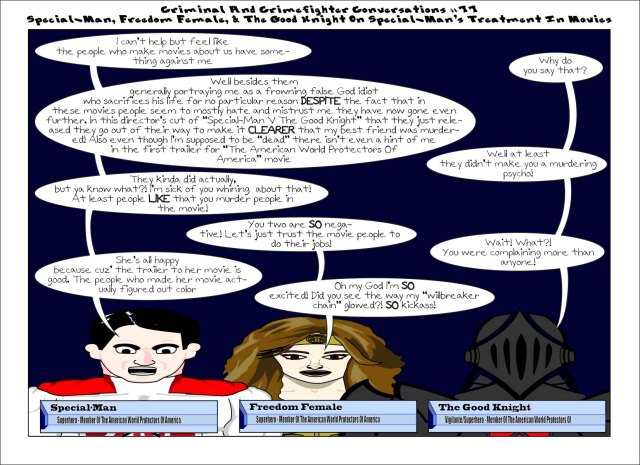 So last week was “San Diego Comic-Con” where every comic book related (and a lot of stuff that isn’t) thing showed off teasers, trailers, and info of all types.  Arguably the biggest thing was the release of the first trailer for “Justice League”.  Gotta say not looking great… The trailer has little action and look colorless like the last few “DC” movies.  Also there’s a scene that’s has been sold SUPER hard as showing how “light” the movie is suppose to be with “Batman” (acting a LOT like “Nick Fury”) recruiting “The Flash” (whose costume looks dumb) and it’s nothing special.

What did look pretty good was the “Wonder Woman” trailer.  There’s actually some decent action and humor and the lasso looks pretty damn cool.

Another thing that happened last week was “Batman V Superman: Ultimate Edition” was released.  I saw it and it is actually better. Only marginally though. It’s less “jumpy” and some things are made clearer.  A lot of those things aren’t important though.

Tomorrow Blind Fury talks about teasers for his show and The Defense Squad among other things. Hope you enjoy and see ya then!