The History Of Comics With Q-boy #66 Ditch The Chick, Drop The Thot, N’ Fly Ya Booty Off Cuz’ Duty Calls (Panel 3) 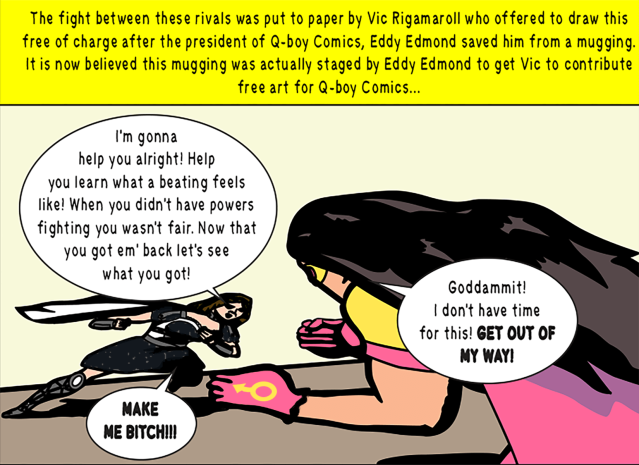 I know it’s been a while but here’s panel 3 from “The History Of Comics With Q-boy” 66. This panel is based on a panel from “Wonder Woman” 177 where “Wonder Woman” fights “Supergirl”. You can check that out here http://bit.ly/ww177panel

Check out new “Criminal And Crimefighter Conversations” on Tuesday-Thurdays. Hope you enjoy and see ya then!

And Blind Fury On A Possible 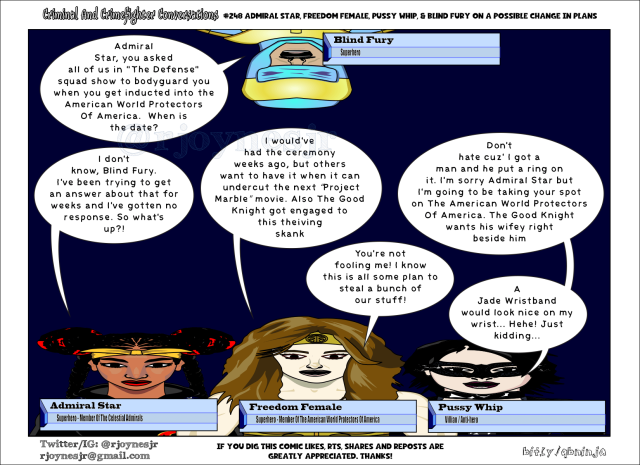 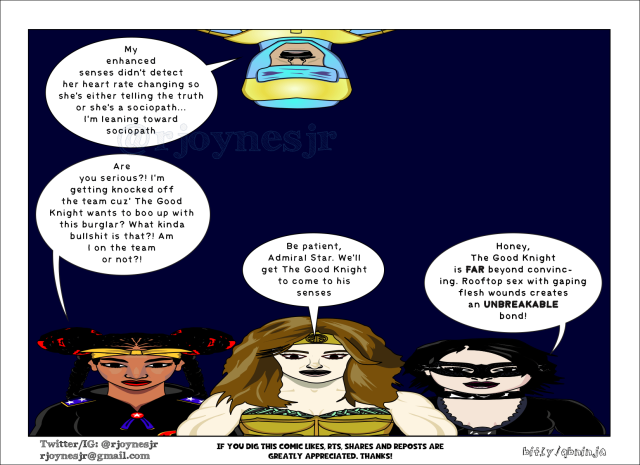 Looks like there’s a delay in Admiral Star joining The American World Protector Of America. This comic is referencing how “Batman” proposed to “Catwoman” not too long ago in the comics. I love making fun of how crazy and hypocritical their relationship is.

Maybe then being together could lead to some interesting stories. It seems it could lead some problems too. If they don’t pull the trigger and have them get married it would be really weak. If they do get married though I can’t see it lasting. Then you gotta have a divorce or something which seems to age them. Then you gotta have yet another reboot.

That’s it for this week! Check out new “Criminal And Crimefighter Conversations” on Tuesdays-Thursdays. Hope you enjoy and see ya!

Conversations 247 – Hazard Hands, Freedom Female, Luscious Trapp, & Spiderous-Man On A “What They 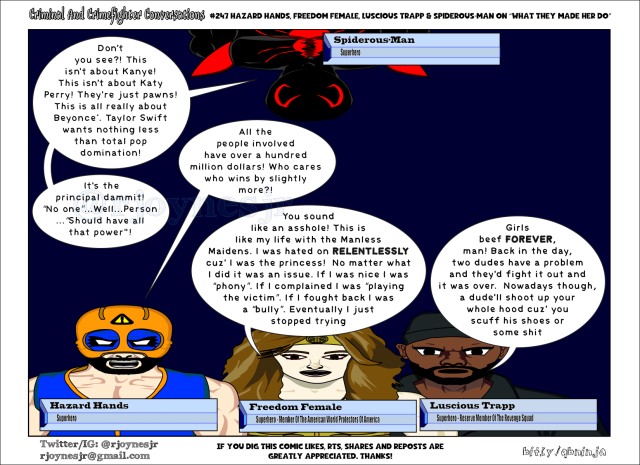 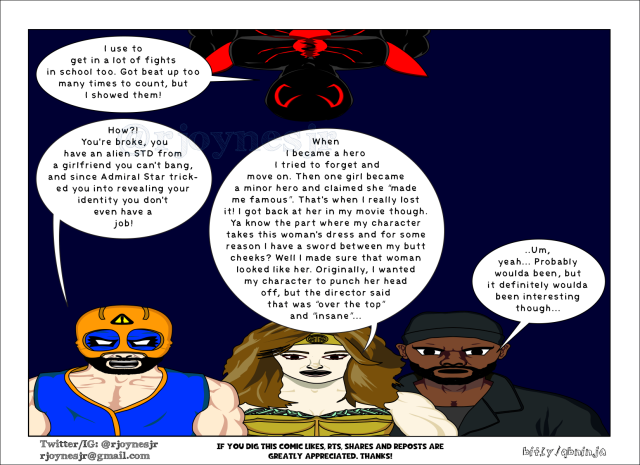 Yep, we’re still on this Taylor Swift stuff. Even if she’s the supervillain some people make her out to be she’s better than, Kanye and the Kardashians. If Bey n’ Jay are the rulers of music/celebrity they rule from above. Their decrees are heard every once in a while from on high. Down here with us Kanye and Kim Kardashian. A narcissist nut only second to Trump and his emotionless nothing of a wife.

Taylor at least has a sense of humor about herself. For all the talk of the “shots” taken in her song and video “Look What You Made Me Do” in the end she makes fun of every version of herself. Even the supervillain.

Tomorrow we switch gears and finally see what’s going on with Admiral Star joining The American World Protectors. We hear from Admiral Star, Freedom Female, Pussy Whip, and Blind Fury about it. Hope you enjoy and see ya then! 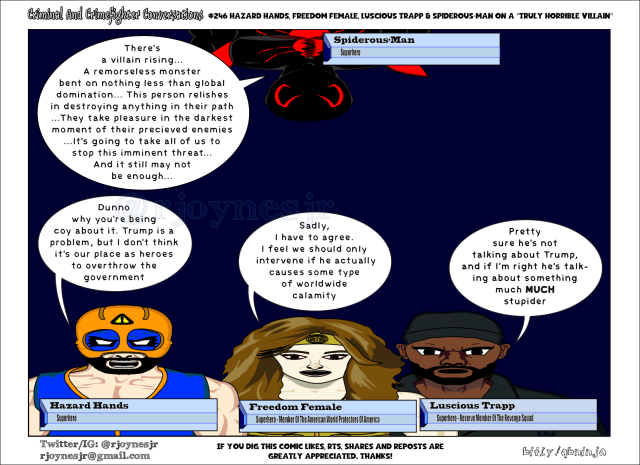 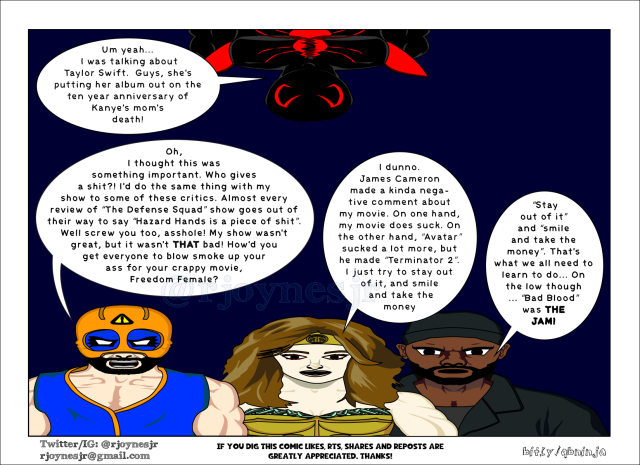 The main topic of this comic is Taylor Swift putting out on her album on the 10th anniversary the death of Kanye West’s mom. This was a whole thing on Facebook towards the end of last week.

Was it on purpose? I doubt it, but more importantly, I don’t care. If Kanye and Kim Kardashians are the heroes they I gotta lean towards the villain. I don’t watch a lot of videos anymore but Taylor Swift has “Bad Blood” which is the best video I’ve seen since that came out. She also has the commercial where she falls off the treadmill.

Tomorrow these guys return for more of this. Hope you enjoy and see ya then!

The History Of Comics With Q-boy #66 Ditch The Chick, Drop The Thot, N’ Fly Ya Booty Off Cuz’ Duty Calls (Panel 1) 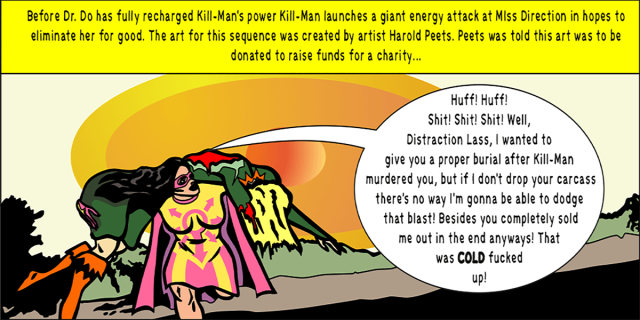 It’s been a while since the last update for “The History Of Comics With Q-boy”.  I’m still trying to find the best schedule for doing these comics. Anyways, when we last left off Kill-Man had just murdered Distraction Lass and Miss Direction barely escaped with her life.

This panel is based on the cover of “Wonder Woman” 96 which was drawn by Harry G. Peters.  You can check it out at http://bit.ly/ww96cover

Check out new “Criminal And Crimefighter Conversations” on Tuesday-Thursday. Hope you enjoy and see ya then!

Admiral A On Spending Money 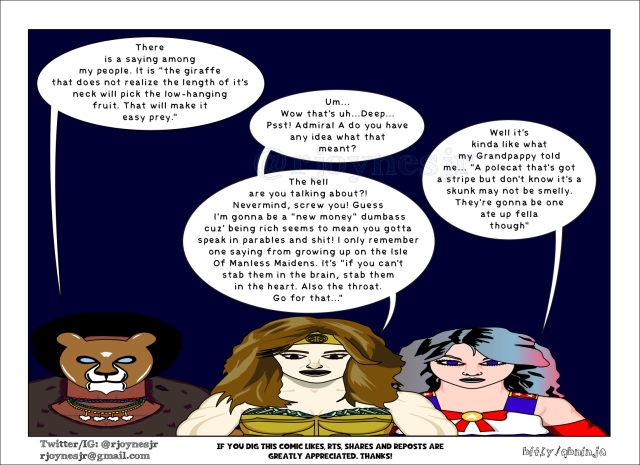 The “Black Panther” teaser trailer came out over this weekend. I didn’t see enough to make any real judgment about the movie yet. I’m little concerned about the obvious CGI of “Black Panther” in some parts. C’mon guys this ain’t “Spider-Man” 1. Got a feeling this is the movie where “Marvel” might slip up. I hope not, but no roll lasts forever…

Back To “Sailor Moon” Stuff

After a week’s break the “Sailor Moon” characters “The Celestial Admirals” return. Last week I finished both the “DiC” and “Viz” dubs of season 2 of “Sailor Moon” or “Sailor Moon R”… There’s a lot to get to and I’ll go more into them later. Here’s a tl;dr read list of things about it though:
I also started on the “Cloverway” dub of season 3 or “Sailor Moon S”. What happened to “Sailor Moon’s” voice.?! It sounds like they took the original voice actress, and fired her. Then hired her grandmother, and punched in the throat before every take.
Tomorrow Freedom Female and Proud Lion talk with Space King and Spiderous-Man. They discuss investing and Proud Lion dishes out another saying. Hope you enjoy and see ya then!
Twitter, IG, Flipagram: @rjoynesjr
rjoynesjr@gmail.com
(Please share, retweet, etc.) 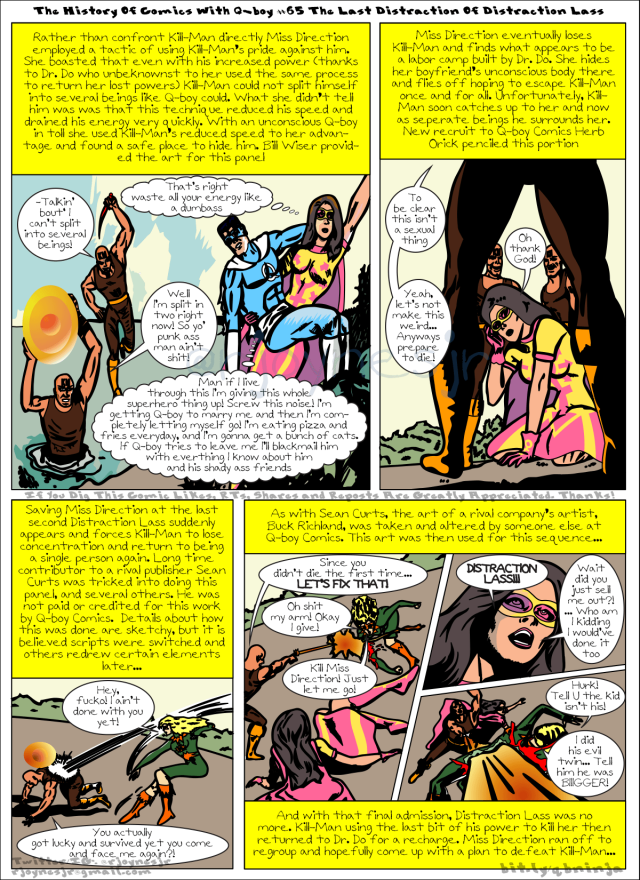 Finally got this page done! Hoorah! So now we see the fate of Distraction Lass. Quickly let’s recap the panels:

Tune in Tuesday-Thursday for new “Criminal And Crimefighter Conversations”. Hope you enjoy and see ya then! 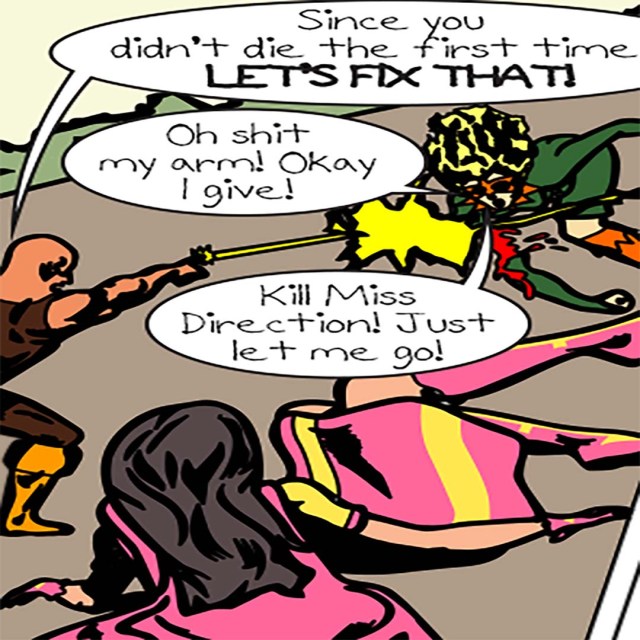 More than likely what you’ll be seeing now is the first section of the final panel of this comic. This panel is actually 3 seperate panels.

This weekend I’ll try to finish this whole comic, and that will be the update for Monday.

On to some comic show talk. First the positive stuff. Gotta say the “Legends Of Tomorrow” finale was pretty good. Again I must applaud the VAST improvement over the first season.

Now… Sigh! Let’s get to it…. “Agents Of Shield” came back… Why can’t this show stay away forever?! Or better yet make is not part of the “Marvel Cinematic Universe”. The loose connection to it is the only thing this forces me to slog through this every episode. This reminds me of something some guy on “Twitter” tweeted. It was about how “Skye” should’ve been the main chick in the “Ghost In A Shell” movie. As I said in my reply to this I don’t care about “Ghost In A Shell”. To me the original anime was well animated, but I was never super big on it. Anyways, I replied to that tweet with a gif of “Michael Scott” screaming “no!”.

The characters on this show are terrible. There’s nothing you can do with them. You can throw in “Ghost Rider”. (Horrible waste of a character). You can change reality. It doesn’t matter. These characters are dull. Oh and unless “Ward” actually alive and the last 3 seasons of this show were a dream. Don’t bother bringing him back. It’s annoying at this point.

That’s it for this week. As stated before, there will another update on this comic on Monday. Check out “Criminal And Crimefighter Conversations” on Tuesday-Thursday. Hope you enjoy and see ya then! 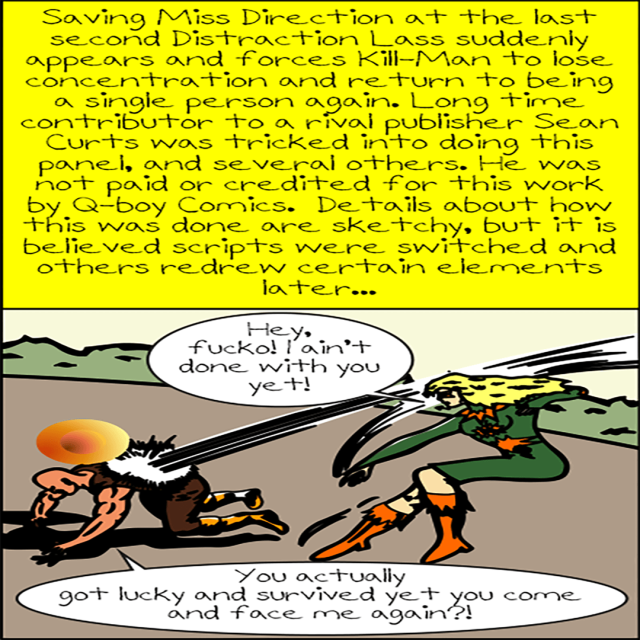 This is the third panel from “The History Of Comics With Q-boy” 65. This is based on a panel from “Action Comics” 278 which you can check out here http://bit.ly/acomics278 .

On Friday there will be another update for “The History Of Comic With Q-boy” 65. It will either be the whole page of something from the final panel. Check out new “Criminal And Crimefighter Conversations” on Tuesday-Thursday. Hope you enjoy and see ya then! 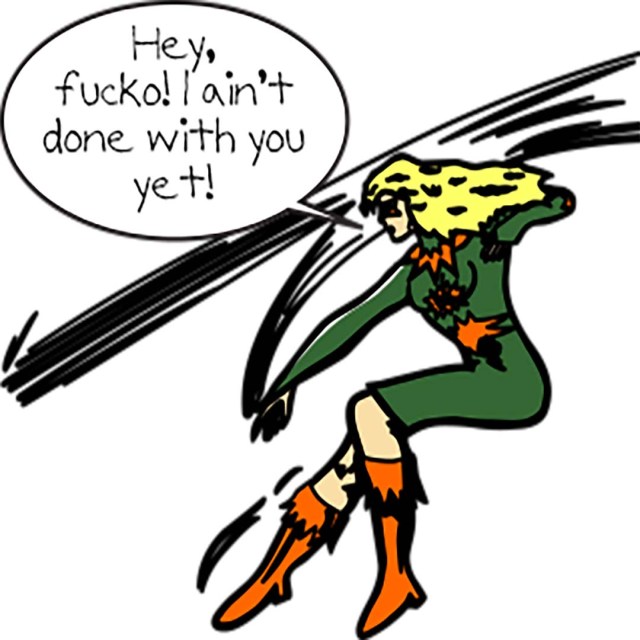 This update is something from the 3rd panel of “The History Of Comics With Q-boy” 65. The next update on Monday will either be this panel completed or the whole comic. It depends how much I can get done this weekend. That’s it for this week. Check out new “Criminal And Crimefighter Conversations” on Tuesday-Thursday. Hope you enjoy and see ya then!