Succubus, Red Witch, & Drizzle On The Possibility Of 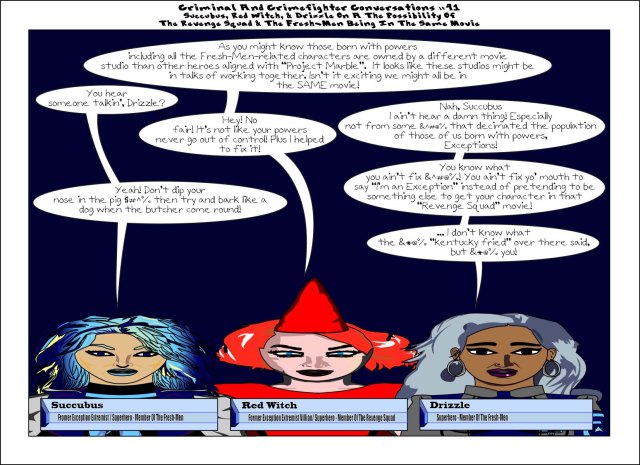 Supposedly Marvel has been talking with Fox possibly about an “Avengers VS X-men” movie.  If Fox and Marvel make a deal DC REALLY has no hope being escaping being number 2. Could we actually get a good Fantastic Four movie? Deadpool in the MCU?  Avengers with Wolverine and Spider-man?

That’s the saddest part is. Marvel has literally been winning with both hands tied behind it’s back. And winning by a lot. I know I’ve gone on a lot about “Batman V Superman” but people aren’t grasping how big a failure it is.  DC pretty much gave you all of it’s best in one movie.  Again it put the 3 most recognizable names in the world in one movie.  You take the Batman and Superman logo anywhere in the world and people know what they mean. Marvel has no equivalent. The closest you could get is maybe Spider-Man, Wolverine, and Deadpool (after the movie) and you’d still probably have to add the Avengers and it still not the same.

I think the key is Marvel is still hungry.  You hear the Russo brother (the directors of “Winter Soldier” and “Civil War”) talk in an interview and you know these guy aren’t taking anything for granted. They write as if they know Spiderman is going to be in the movie so that Marvel has to fight to get him.  They don’t settle for less.

That’s it for this week. Next week starts with a new “History Of Comics With Q-boy” and Tuesday-Thurday we’ll have some new “Criminal And Crimefighter Conversations”. See ya then, and hope you enjoy!