In the comics “Misty Knight” has a bionic arm. That’s pretty much what this comic is about. I haven’t watched anymore of “Luke Cage” (still only about half way through), but nothing about the show would make me think the “Misty Knight” on that show is going to get some type of robotic arm by the end. Although if she did and it said “Stark” or something on it that would be awesome.

That’s it for this week. Check out new “Criminal And Crimefighter Conversations” next Tuesday-Thursday. Hope you enjoy and see ya then! 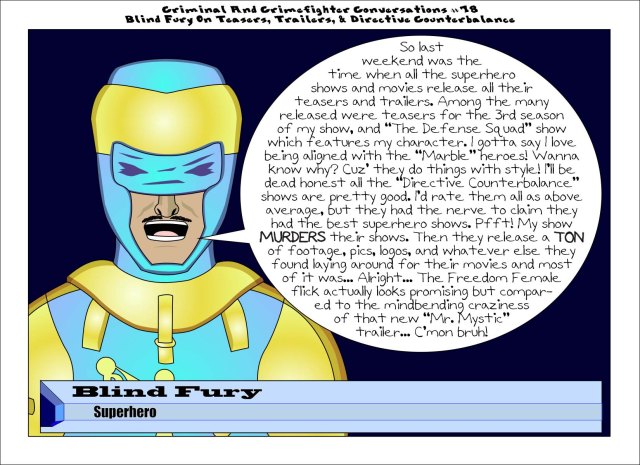 Man that “Defenders” show is going to be nuts!  So far “Marvel’s” got 2 A+ shows on “Netflix” with “Daredevil” and “Jessica Jones”, and “Luke Cage” is looking pretty sweet from the teaser released at “SanDiego Comic-Con”.  The “Iron Fist” teaser doesn’t really show enough to form much of an opinion about it though. If only we got a “Netflix” “Ghost Rider” show instead of him being on “Agents Of Shield” next season and being completely ruined.

Tomorrow The Minstrel, Jade Archer, & Quicker discuss Jade Archer’s frustrations and their respective TV shows and movie. Hope you enjoy and see ya then! 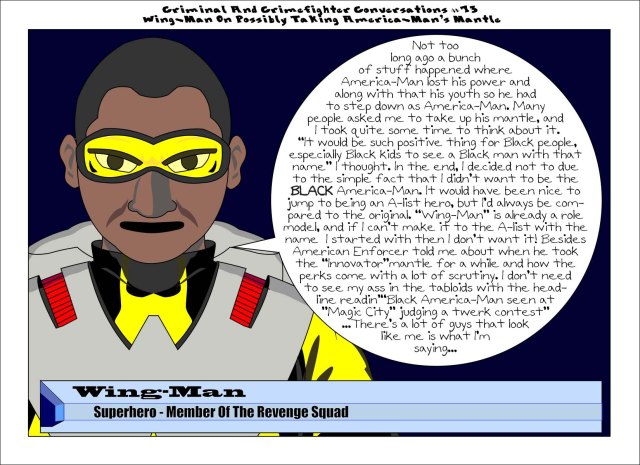 Now in “Marvel” there’s is or will be 2 “Captain Americas”, “Thors”, “Spider-Men”, and “Iron Men” at the same time.  That seems confusing from a branding perspective as well as within the “Marvel” universe itself. If someone yells out “Captain America” in a battle you don’t want 2 guys responding.  All of these choices were to help promote diversity which is admirable, but I really wish “Marvel” would just put the time and effort into creating entirely new characters, and using characters that already exist.  This is what they did with “Luke Cage”.  They got rid of the yellow shirt and the headband, and started using him.  Now he’s got a show coming out on “Netflix” after being part of the “Jessica Jones” show (which is based on the comic “Alias” where “Luke Cage” started being used again and gaining popularity).

“The Falcon” is awesome in the movies. So why not make the comic version of him more like the movie one? That’s what they did with “Nick Fury”. Anyways that’s it for this week.  Next week starts off with a “The History Of Comics With Q-boy” where America-Man is called in for a rescue mission and we meet the man known as Dick Anger. New “Criminal And Crimefighter Conversations” Tuesday-Thursday.  Hope you enjoy and see ya then!