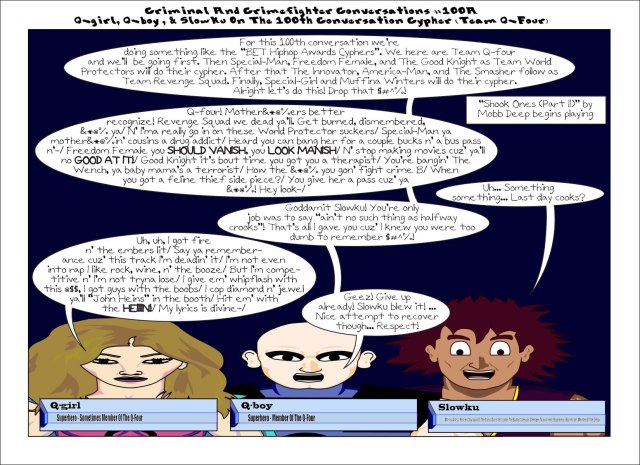 So this 100th comic is in 4 parts. This is the first part. For each of these I’ll explain some references people may not know

“Bangin’ The Wench” = Reference to “Batgirl” having sex with “Batman” in the direct to DVD movie “Batman: The Killing Joke”.

“Ain’t no such thing as half way crooks” = Famous line from “Shook Ones (Part II)” by “Mobb Deep. Also a big part of the “Eminem” movie “8 Mile” when he quotes the line from the song while rhyming to the “Shook One” instrumental in his final battle against “Papa Doc”

John Hein/”Hit em’ with the hein”= Howard Stern show reference. A lot to explain but the short version is describing someone who has low energy

Criminal And Crimefighter Conversations #100B 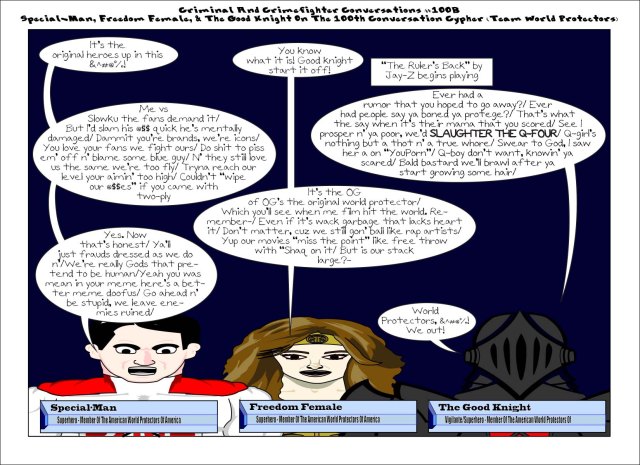 “Blame some blue guy” = Reference to how “DC’s” event “Rebirth” seems to blame the “darkness” of “DC’s” universe on “Dr. Manhattan” from “Watchmen” altering things/

The Innovator, America-Man, & The Smasher The 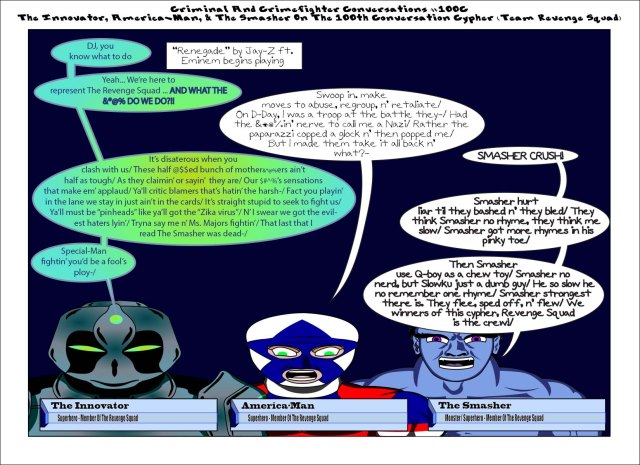 “Call me a Nazi” = Reference to all the “HydraCap” nonsense that was going on where in the current “Captain America” comic he was altered to think he’s a “Hydra” agent and people were being total rubes and calling him a Nazi.

“Me n’ Ms. Majors fightin’” = Reference to “Civil War II” where “Iron Man” and “Captain Marvel” are fighting over some “Inhuman” kid that can predict the future and whether to use him or not 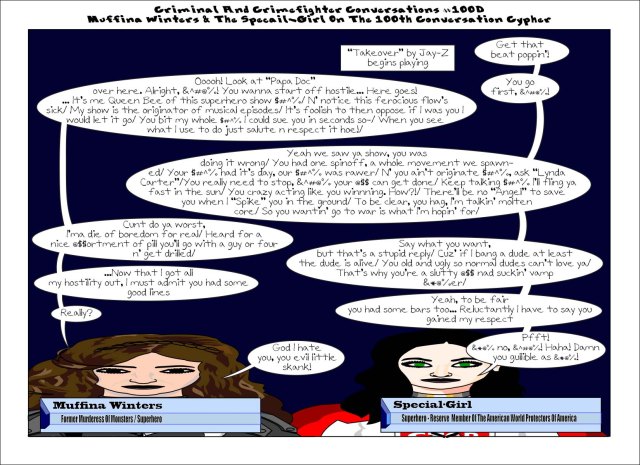 “Papa Doc” = Mentioned  before but he’s the guy Eminem battles at the end of “8 Mile”. The battle begins with a coin toss to see who goes first and he says “let that bitch go first”. Played “Anthony Mackie” aka “The Falcon” in “Marvel movies.

“Originator of musical episodes” = The “Buffy The Vampire Slayer” episode “One More Time With Feeling” seemed to popularize TV shows doing musical episodes with varying results. “Supergirl” is suppose to have a musical crossover with “The Flash” next season.

It’s been great giving you these first 100 comics. To 100 more and way beyond.  Thanks to everyone who liked, retweeted, commented, shared, and just read these. I appreciate it more than you can know. See ya next Tuesday-Thursday for more “Criminal And Crimefighter Conversations”. Hope you enjoy and see ya then!